Posted on May 16, 2019 Posted By: Marie-Josée ThibaultCategories: MJ's Blog

There was some downtime for the blog. The Internet was offline often these past months and when it came back we had to catch-up with our work and with the newsletter which is a priority. Good news, it is true that all things work for the good of those who love God, our Internet company has now installed an antenna, which should improve communication and stop breaks in the land line. Alléluia!

We have planted dates, lemons and vegetables to see what the soil can produce. We are interested in agriculture in many ways, creating jobs, making the community financially independent and also starting to train young people to become involved in agriculture. Of course, we are talking about several years for these projects all the while not disdaining the small beginnings. We visited a farm that was initially exploited by whites but is now in the hands of Haitians who sell a multiple a choice of quality products. These lands were seen as unworkable and were called desolate land, it was filled with cactus and dry grass, you should see the abundance of harvest in this area now, besides, they use the cactus to make fences around their farmland, which prevents the animals from entering . These lands are no longer a land of desolation but very abundant land. (See photos below). We talked with farmers in these areas for advice and met with ambitious Haitians to see their country come out of misery and work their land.

The Bible says in Ecclesiastes: “What represents a benefit to the country in every respect is a king who favors the cultivation of the earth” Ecl. 5.8. We have now employed a professional Haitian agronomist. The Haitians have been enthusiastic about the culture project and want to work to develop their country, the young people are very eager to get out, something new and fresh is happening in Haiti, we can see the little cloud of Elijah who announced the rain after 3 years without a drop, a tiny lonely cloud that appeared, and the prophet knew that the blessing of the Lord was coming, it is what we feel very strongly in our hearts, Peter and I, for this country, as far as the very young rising generation is concerned.

For the computer classes, we now have two classes and there are some excellent students who are starting to take care of other less advanced or new ones. Peter gives them the opportunity to teach what they master to introduce them to teach and share their knowledge with others.

Here is the land of desolation before the work of agriculture. Everything seems dry and desert like, filled with cactus. No surrounding water. 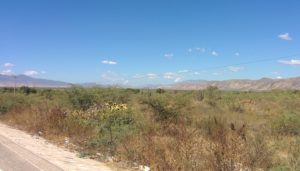 The shrubs you see from afar are cactui. 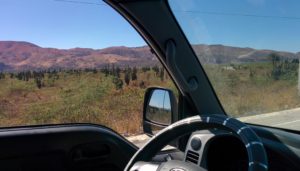 Now look at the land of desolation that has become a the land of blessing with water in the farmland, watered by a pumping system. 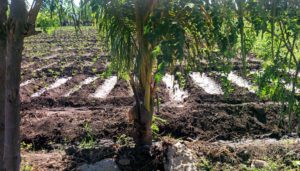 For those who know the guy in shorts, it’s Guiber Ouellette and the lady, a Haitian businesswoman for the economic growth of her country. 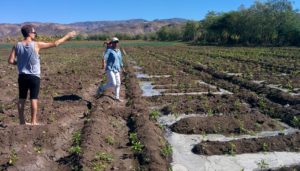 The small young plants to the left with older ones on the right. 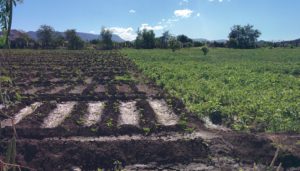 A watering system , Peter knows how it works, not me 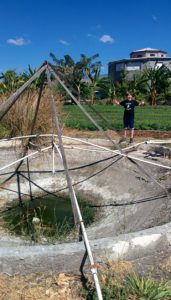 This is how the LORD changes a desolate and dry land into a land, watered and blessed. 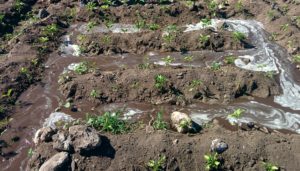 At Anatoth there was a parcel of land that some said, “nothing will grow there,”. We are currently preparing crops on these lands with the encouragement of the farmers we visited on the desolate land. Life is there, it’s coming… to be continued.

Speaking of gardens, here is a big slimy slug with antennas, it is as long as my middle finger, and half an inch wide, I asked a Haitian if it stung, he replied “no, no it’s  not dangerous a little water and lemon juice and everything is fine “I’m not sure to understand the answer but …. nothing reassuring! Finally, I will not touch it even if we have lemons. There is another insect as big that looks like it but it has fifty small paws and he moves very fast. One of them was rushing towards me and I frighten. Usually I am not afraid of insects but the one with little paws will certainly not become my friend. I thought, what will I do if I find that in my bed? just thinking about it, I have shivers, fortunately I have a well-closed net that protects me from that. I hope. 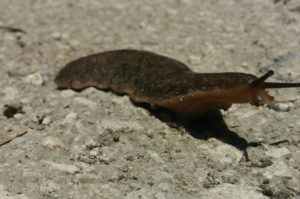 Coconut trees, banana trees and installation of hose for watering. 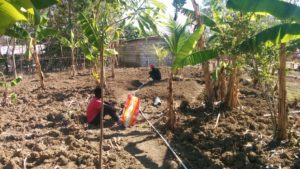 I heard about God’s creation but it was limited to Canada, pictures and maybe Hawaii where the flowers always impressed me but I had not seen everything, his creation still speaks of HIM.

Here is a tree that bears this cluster of flowers and I do not know its name yet. 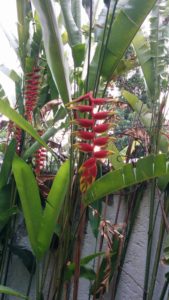 Here it a close-up, but the photo does not show it’s true colors. It’s bright red and at it’s ends a bright fluorescent green, too difficult for the camera to capture that. 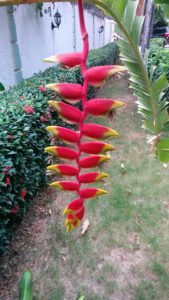 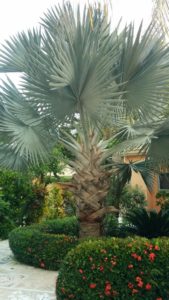 Does this tree render glory to its creator? 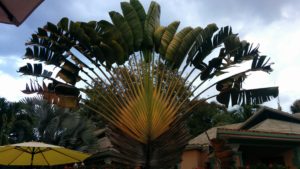 Thank you for reading and visiting Haïti with me.